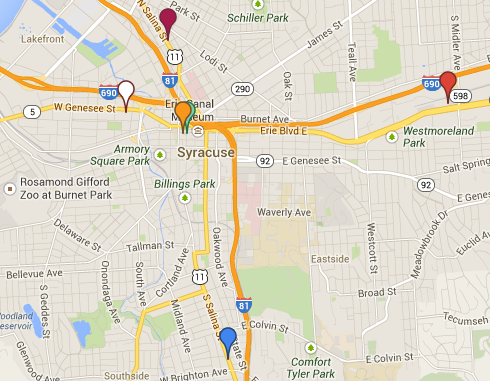 The locations of the nine healthcare navigators in Onondaga County.

Lost and confused in the new healthcare system?

“We can help figure out the system,” said Steve Wood, community health coordinator at ACR Health, a non-profit organization in Syracuse that offers education on healthcare issues. People have been “intimidated” by the new healthcare law called the Affordable Care Act, said Wood. But they don’t have to be. “If you make a mistake,” Wood said, “it can be fixed.”

Wood oversees four of the nine healthcare navigators in Onondaga County. They help the uninsured meet the requirements of the Affordable Care Act — sometimes called Obamacare — that went into effect Oct. 1, 2013. The law requires that most Americans be insured or face a financial penalty. The first open enrollment period closes March 31.

Before Obamacare, 48 million Americans lived uninsured. That included more than 46,000 — or about 10 percent — of Onondaga County residents. The law is the most significant legislative achievement of the Obama Administration.

Under the law, New York expanded Medicaid coverage to adults with incomes below 138 percent of the federal poverty level, which is about $23,550 a year for a family of four. Medicaid is the tax-supported joint insurance program run by the states and the federal government. With the new system, more people qualify: low-wage earners, part-time workers and people who once made too much to be eligible.

To help the uninsured find health coverage, the government launched a national online marketplace for purchasing plans. But early on, the site experienced severe glitches. Confusion and frustration followed.

In Onondaga County, the healthcare navigators steer people through the New York “State of Health” insurance website. Navigators explain the law and provide one-on-one guidance. They also figure out options and enroll people in plans.

The system works, said health coordinator Wood of ACR Health, because the navigators are experts. “We know the website very well,” Wood said. “The navigators use the site multiple times every day.”

ACR Health has four navigators in Onondaga County. They operate out of the center’s main office at 627 W. Genesee St. But sometimes they meet clients at alternate locations, like Dunkin’ Donuts or Wegmans supermarkets. Navigators will improvise if it means they can help, Wood said.

But still some people don’t use the online marketplace. It is typically because they want to protect private information, Wood said. “Any time you ask people to enter highly personal information, they get intimidated,” he said. “People are afraid the IRS is going to track them down. That’s not the case.”

Those who benefit from its services are mostly self-employed or small-business employees, she said. That’s why she stationed a navigator at the South Side Innovation Center, at 2610 S. Salina St.

The center houses 27 small businesses and teaches another 350 entrepreneurs how to manage growing companies. Many of the center’s tenants lacked health insurance, said El-Java Williams Abdul-Qadir, the center’s director.

“Sometimes entrepreneurs forgo healthcare because if that’s their primary income, they may not be able to purchase it,” Abdul-Qadir said.

(Joe Infantino is a senior majoring in newspaper and online journalism with a minor in anthropology.)