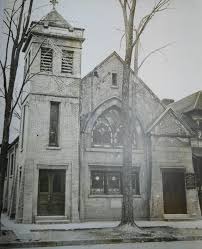 An older picture of ​the first black church of Syracuse, AME Zion Church, built by fugitive slave Jermain Loguen in 1910. Courtesy of Save 711 AME Zion, 2014.

For runaway slaves, the AME Zion Church in downtown Syracuse was a stop on the underground railroad. Now it is among the sites in Syracuse that is a tourist attraction during Black History Month.

AME Zion Church was the first black church of Syracuse, organized in 1835 by fugitive slave the Rev. Thomas James. The building that stands now was built in 1910 on East Fayette Street.

Dennis Connors is the curator of history at the Onondaga Historical Association.  The church and the community of Syracuse was a major stop on the underground railroad, Connors said.

“Syracuse was very important to the underground railroad for many reasons. One was certainly location- in the north slaves used regular transportation routes and Syracuse had good transportation connections, rails and canals. Second, upstate was an area where a lot of activity of progressive reform and strong support. Third, a very important part was the presence of Jermain Loguen known as a ‘station master,’ whose house and contacts were main underground railroad activity,” said Connors. 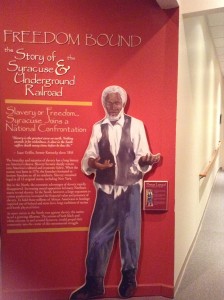 An informational wall at the Onondaga Historical Association about Syracuse’s part in the Freedom Bound Movement. Photo by Shantinique Brooks.

Connors recommends visitors visit three other major black historical attractions in Syracuse. They are the Onondaga Historical Association, The Mission Restaurant that was formerly the Wesleyan Methodist Church and The Jerry Rescue Monument.

Spike Herzig is a former tour operator and now the founder and president of the New York Cultural Heritage Tourism Network in Syracuse, which puts together historical site packages for visitors and educates businesses on how to host those visitors. The network  is  made up of 115 members. The network’s goal is to market the cultural attractions to drive more business into upstate New York.

For Black History Month, the network sells underground railroad tours. But the weather is an obstacle, said Herzig.

Other stops and attractions along Syracuse’s Underground Railroad include:

(Shantinique Brooks is a senior majoring in broadcast and digital journalism with a political science minor.)