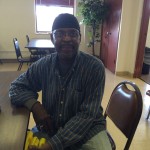 “So you think that it’s vital they would try to steer their children here in the city of how important education is – because all I see is like there’s a lot of young girls pushing strollers, there’s a lot of young guys hanging around in the corner, ain’t looking for work and stuff like that. And that is a really turn-off to me.”
(Robert Bradley of Syracuse, 55, machine operator at Scotsman Media Group, Democrat) 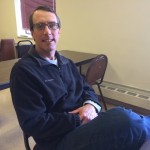 “I think the city has become a big hole and I would like to see the county kicking in the taxes for the city, because everybody has moved out of the city who can. They’re moving out to the wider county area. And now the city has no money.  And a I believe there should be a county tax that goes to the city.”
(David Lacomb of DeWitt, 52, graphic designer at Scotsman Media Group, unaffiliated with a political party) 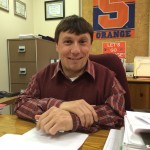 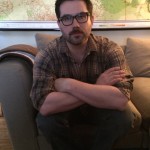 “To address boredom. To un-bore people. Specifically I think young people are bored and are getting into trouble. So I’d love to see more programs for pre-teens in particular and for teenagers through the educational systems or the parks department, typically when school is out afterschool or summertime. So keeping young people not bored keeps them out of trouble, which is – I  think – a  cheaper, more rewarding way than dealing with the trouble that does come up two years later.”
(Adam Sudman of Syracuse, 38, event manager for My Lucky Tummy, Democrat) 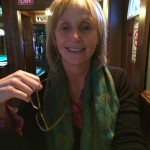 “I think our government should be working on job creation. I think we should also be paying more attention to our vets that are coming home and not having jobs and places that give support. Also protecting the environment – we don’t take care of our environment then we won’t have anything.”
(Susan Parker of Cazenovia, 56, master gardener at Cornell Cooperative Extension, Democrat)

(Vekonda Luangaphay is a graduate student in magazine, newspaper and online journalism.)