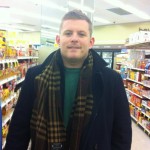 “One of the things I think is there should be more relief programs for student loans, especially federal student loans.  I personally would like to advocate for loan forgiveness. I think that the state of the economy, particularly when I graduated in 2008, was really difficult for people to find a job.  And then it feels like you’re playing catch-up in this demographic.”
(Justin Lynch, 27, of Liverpool, online relations manager at Syracuse Convention & Visitors Bureau, Democrat) 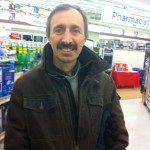 “I think young people need help now getting started.  I think it’s harder for young people to get started today than when I was starting out.   I think the system today is much more unstructured and fractured and it’s hard for people to get good paying jobs and get started today than it used to be in the past.”
(Pat Piscitelli, 58, of Baldwinsville,  state public service and utilities commissioner, unaffiliated with a political party)

“I think it should cover people that can’t afford traditional healthcare.  Healthcare that would be provided by a good employer, because a lot of employers have watered down their healthcare.  And people can’t get healthcare who need it, especially people who are middle-income.”
(Tom Saehrig, 24, of Syracuse, self-employed landscape designer, Republican)

“I care about stuff going on in foreign policy.  Conflict with the Middle East: Iran, Egypt, Syria, are big issues for me.  I mean there’s a lot of conflict going on there—Syria especially.  And I know the United States is trying to get a little bit involved.  So I would like to see that we are capable of finding some kind of resolution  and that we do so in the near future.”
(Brad Evans, 20, of Cazenovia, fashion model at Hollister Co., Democrat)

“I think it’s also better to care about the way other people are being treated and not just yourself.  There’s so much poverty in this area. Like real, extreme poverty—people really living on the margins. And you look at the quality of these schools and neighborhoods and it just breaks your heart.  You know? And you wish there’s something you could do about it.”
(David Yaffe, 41, of Syracuse, English professor at Syracuse University, Democrat)

(Caroline Strange is a junior with dual majors in broadcast and digital journalism and anthropology with a minor in political science.)