Making Syracuse a Work of Art 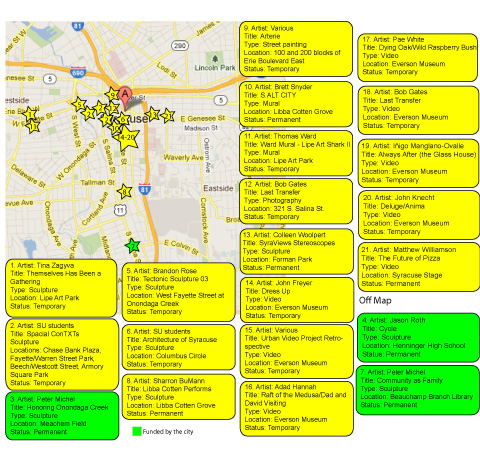 A giant serpent popping out of the concrete alongside a creek. A mural depicting people’s favorite aspects of Syracuse like snow-capped hills. A sculpture of a pair of bells to be rung to let go of lost love.

Public art projects like these have become a staple in Syracuse over the last few years. And Syracuse’s public arts efforts are only growing, champions of public art say.

“It’s a very exciting time right now because the level of interest and the amount of public art coming into being is really just very exciting. It’s really expanded, especially over the last couple years,” said Kate Auwaerter, the city’s public art coordinator.

Now, close to 200 pieces of public art pepper the city. In 2011, Syracuse gained 21 sculptures, murals and videos. They were approved by the Syracuse Public Art Commission, the group in City Hall headed by Auwaerter that reviews public art proposals. The 11 members of the commission are appointed by the mayor and the Common Council. The commission must include four artists, four members of the public who are not artists, one art administrator or curator and two representatives from neighborhood planning councils.
Syracuse’s public art is partly paid by funding from Common Council, Auwaerter said. The city has side aside $25,000 each year since 2009 to buy public art. Last year, that money helped pay for six pieces, each in a different neighborhood.

But the neighborhood planning councils had to provide a matching fund. Most public art is funded through grants from private programs like the Connective Corridor, a Syracuse University program to revitalize the city, Auwaerter said.

To create a steadier stream of funding for public art, Auwaerter and the rest of the public art commission are finalizing a public-art master plan. The master plan would include a way for the city to fund projects, map potential sites for new projects and set a standard of the type of art the city should approved. The plan has been in the works since the commission was established in 2007 and will likely be adopted by the end of this year, Auwaerter said.

The master plan has taken five years to complete because the commission’s first couple years were spent getting organized and figuring out its application and processes, Auwaerter said. “There’s no controversy in it,” Auwaerter said.

Right now, most of then Common Council’s role in public art is to approve the spaces it will occupy and allocate manpower for installation if needed, said Patrick Hogan, D-District 2, which includes the northwestern part of the city. Getting public art, Hogan said, “is a private-public partnership.”

Syracuse is behind most cities in terms of public art programs, said Maarten Jacobs, director of the Near Westside Initiative, an SU program to revitalize the near west side. But he finds it encouraging, he said, that public art is gaining more interest.

“People are starting to believe in the positive impact that art can have on the public experience,” Jacobs said.

The Near Westside Initiative has been the spearhead for some public art projects. One of his favorites, Jacobs said, was the 2010 painting of the train bridges that cross West Fayette Street with scenes of what people love about Syracuse. For that and many other of its art projects, the Near Westside Initiative got funding from the Connective Corridor. The corridor has an $800,000 budget for public art, Jacobs said.

The Near Westside Initiative also played a part in appointing the city’s first public artist in residence, Brandon Rose. He will finish his yearlong tenure in May. Rose was tasked with completing two projects. The first is a sculpture of a serpent dubbed Walt the Loch West Monster along the Onondaga Creekwalk. It  was completed in November. He is working on his second project, a series of abstract sculptures representing interactions of love, such as a kissing bench and the bells representing lost love.

(Rebecca Kheel is a senior with dual majors in newspaper journalism and history.)