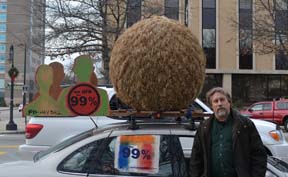 It is a circular bail of hay on top of his car with signs that say “We are the 99 percent.’” He explains the symbolism this way: “When all forces are equal, everything becomes a sphere,” Shaughnessy said.  “The hay is a symbol of the working person.”

Shaughnessy is among the Missourians contributing to Occupy New Hampshire. The movement, which started with a focus on Wall Street, has expanded across the country. It’s a mixed bag of protest against poverty, what its members consider corporate greed and the growing income inequality in the United States with most of the country’s wealth going to the top 1 percent  instead of — in the movement’s slogan — the other 99 percent.

Occupiers usually camp out in public places, chanting and singing their messages. In New Hampshire, the Occupiers staged a funeral procession, marking what they consider to be the death of the American dream.

Victor Lee, 30, another Kansas City, Mo., has been traveling to different Occupy groups around the country. Winter is the off-season from his job as a painter, he said.   So far, he said, he has been to the Occupy encampments in Kansas City, Mo.; Denver, Colo.; and Austin, Texas.

“I want to see a change in America,” Lee said.  “We need the real 99 percent out here, and I have a feeling that it’s going to get a lot worse before that 99 percent shows up.”

As a Ron Paul supporter, Lee said, he trusted the libertarian small-government presidential candidate more than others.  “He’s out there for the people,” Lee said.  “He seems to be more straight to the point, and not ‘I’m Mr. executive bad ass.’”

Debra Dickerson, originally from St. Louis, Mo., and a Harvard Law School graduate,  has adopted the Occupy movement because of what she sees as its committment to social justice.

In her earlier career, Dickerson, 52, has written for Mother Jones magazine,  The Washington Post, The New York Times Magazine, Good Housekeeping, the New Republic, Slate, the Village Voice and Essence. Now, she said, she is not sure where she will sleep. She is struggling, she said, after a financially devastating divorce. She has described herself in some interviews as  “homeless.”

She is sharply critical of the wealthy elite. “The one percent have just taken away one liberty after another,” Dickerson said.

For his part, Kansas City artist Shaughnessy  is happy to be a “spectacle” for Occupy. Witness the hay ball on his car. In his day job, he’s an art teacher at the University of Southern Maine. He praises the Occupy movement for educating the public about what he sees as political corruption.

“The country’s a mess,” Shaughnessy said. “Our politicians are bought and sold.”

(Kathleen Lees, a graduate student in magazine, newspaper and online journalism at Syracuse University, contributed this story to My Missourian. )