Lessons from a New Hampshire Adventure 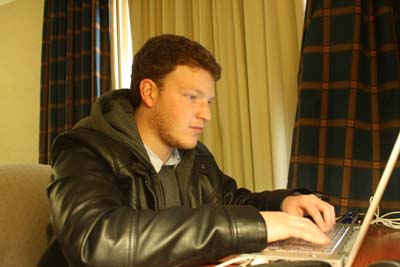 Hordes of reporters swarm to New Hampshire for the first-in-the-nation primary. After four years of studying journalism and political science from the classroom, I’ve been thrown into real-world reporting. Armed with my reporter’s notebook, a tape recorder, and a camera, I jumped into the scrum.

Here are some New Hampshire memories:

Saturday night I found my designated spot among the 700 other national journalists in a packed Saint Anselm College gymnasium. I was sandwiched between Al Jazeera representatives to one side and Hearst television on the other side. The New York Times contingent of reporters sat just a few rows ahead.

A lavish food buffet was set up where we could stuff ourselves with free sandwiches, brownies, soda, and cinnamon-flavored mints in GOP red.

When the debate started, reporters typed furiously. They tweeted at 90 miles an hour. The point? A mass of journalists all watching the same show trying to come up with unique stories.

After the debate the media madhouse intensified as journalists converged in the adjacent spin room. The mob shifted from Rick Santorum, to Rand Paul, to Tim Pawlenty, to Nikki Haley. Each person who entered the room seemed more important than the last.

And then, in a flash, it was over as the rush to produce stories  began.

During my week in New Hampshire I’ve had the chance to hear all of the major candidates speak. The more speeches I hear, the more they all seem to blend together. How many times can one be reminded that America is about life, liberty and the pursuit of happiness?

People flock to different town hall events, rallies, and spaghetti dinners to hear candidates speak. Churches, libraries, schools, and diners are full of people all slowly shuffling forward in the hopes of getting a better look at the candidates.

And as I stand in the audience I feel trapped between two worlds. In one, I’m a professional journalist writing for The Saratogian newspaper from Saratoga, N.Y., near where I go to school at Syracuse University.  In the other world, I’m an awestruck college kid seeing some of the most prominent Republicans in America speak. So the real question is: Should I try to go shake Mitt Romney’s hand?

The most colorful people I’ve encountered in New Hampshire were at an Occupy event in Manchester, modeled on the Occupy Wall Street movement. A man from Missouri was at the Occupy protests with a huge ball of hay strapped to the top of his car. In his view, the hay is the most universal crop in America. The ball of it on his car, he said, symbolizes unity and oneness.

The Occupy protests were a reminder that people are angry with Washington. As candidates travel around the state touting their ability to solve all of America’s problems, the harsh reality is that people are divided and struggling.

As the mass of protesters chanted, sang, marched, and drummed, I sat on the sidelines and took it all in. The protest was inspiring. It was cold and windy and miserable outside but these people were willing to be out in the weather to demonstrate for their beliefs.

For a college student, I think it’s easy to become jaded about politics. Everyday things seem to only be getting worse in Washington. There’s so much divisiveness and partisanship. So much anger and hatred.

In grade school I was taught that democracy was quick and easy. It addresses the problems of the country and solves them.  Then you grow up and find out that’s not how it works. Democracy often can be an ugly, dirty, slow fight.

Politics is like an unreliable parent, I’ve come to understand. You don’t trust it, sometimes you don’t even like it, but in the end you crave the comfort and dependability it can provide.

Exactly one year and 32 days after my eighteenth birthday I officially became a part of the democratic process. I was a freshman at Syracuse University in 2008 when I received my absentee ballot in the mail. It marked the beginning of a long, frustrating, and oddly loving relationship with politics.

I needed New Hampshire to remind me why I am a political junkie.

(Ben Klein, a senior with dual majors in magazine journalism and political science at Syracuse University, is covering the New Hampshire primary for The Saratogian. This piece appeared in the Daily Record of Parsippany, N.J.)