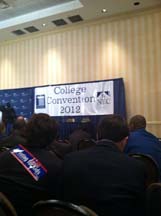 “Huntsman has foreign policy experience, business experience, a history of conservative governance, and a nuanced and practical approach to the issues,” says Cox. “Romney is the safe choice, but if he is the Republican candidate Obama and his super PAC will go after him hard and take him down.”

Cox is among the scores of college students who are flocking to New Hampshire for the presidential primary on Jan. 10 . They are trading in the relaxation of winter break for real-life political experience.  And young voters are playing an increasing role in presidential elections these days.

Some findings about young voters, from the Center for Information and Research on Civic Learning and Engagement, which tracks young people in politics:

Many of those college students are in Concord for the College Convention 2012, a program offered to college-aged voters every four years where they can meet candidates and learn more about the primary system. College Convention 2012 has 390 participants, compared to 1200 attendees four years ago in 2008. Obama inspired and motivated young people in 2008 to be interested in politics. Enthusiasm four years later seems to have waned.

“There is a lot of frustration and cynicism amongst young people,” says Wayne Lesperance, co-director of the convention.  “Many people think Obama did not meet expectations, and they think the politicians are not speaking to them.”

That’s one reason, he and other political experts say, that many young people are attracted to conservative Ron Paul and his limited-government views.

“Business as usual is not working and the appeal is that Paul offers change,” says Lesperance. “Young people have a really strong perception that the system is broken, and no one is talking about how to fix or change that system other than Ron Paul.”

Brian Early, a media spokesperson for the Paul campaign, agrees. He attributes Paul’s appeal to his honestly and commitment to his core values.

“He’s the only one worried about paving the way for the future,” says Early. “Ron Paul isn’t afraid to look at things in a different way, and he’s the only one offering real solutions.”

At the College Convention on Thursday, conservative Rick Santorum ran into some of young voters’ hostility. He arrived in New Hampshire after getting 24.5 percent of the vote in the Iowa caucus. That left him just eight votes behind Mitt Romney, who was the winner.

At the College Convention, Santorum, a staunch social conservative, drew fire for his opposition to gay marriage. When he’d finished his hour-long presentation, Santorum left the stage to a chorus of boos.

Lee Whitten, a senior political science major at Louisiana Tech University, described the crowd reaction as outright disrespectful. “Everyone is entitled to their opinions and all opinions are valid,” says Whitten. “This week is about sorting out the different candidates and different positions and picking which candidate is best suited to serve our country.”

For his part, University of Texas graduate George Cox is relishing his work for Jon Huntsman. Cox works long hours making calls, knocking on doors and standing on corners waving signs that say, “Honk for Huntsman.”

Cox calls Huntsman the candidate most qualified to defeat Obama in a general election. Still, he admits, it will be hard to replicate the energy of the 2008 election. “There was just something magical about 2008, whether you like Obama’s politics or not,” said Cox. “An African American being elected president was a great moment in our history.”

(Ben Klein, a senior with dual majors in magazine journalism and political science at Syracuse University, is covering the New Hampshire primary for The Saratogian.)