Boundless Energy for a Democrat Running in New Hampshire 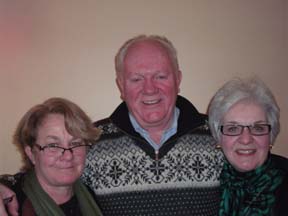 “It’s like uranium, only better. In almost every single aspect, it’s far better,” he said. Greene is running for the Democratic nomination in the New Hampshire presidential primary on Jan. 10, 2012. With President Barack Obama expected to keep his party’s nomination, most of the voter and media attention is going to the Republican candidates. But Greene is among 14 candidates challenging  — sort of — Obama for the Democratic party’s nomination.

“I don’t expect to beat President Obama, but I want to come in second,” he said.

The key to his campaign is what he calls a “one-thousand-year energy plan.” The plan is based on  an element called thorium.

In an interview in a Panera Bread in Nashua, N.H., Greene outlined his vision of endless energy and told how he got into this campaign.

Greene is a 65-year-old native of Lowell, Mass. He graduated from Lowell High School in 1964 as a Carney Medal Scholar and got a degree in physics from the Lowell Technological Institute, now University of Massachusetts Lowell. Greene worked as a deliveryman for The Lowell Sun on and off for about four years when he was in high school.

But it took a weird set of circumstances for him to get into politics, he said. Greene only entered the race in October. His church group in California was researching new ways to solve the energy problem and they stumbled upon thorium, a radioactive chemical. Greene ran with the idea and ended up in New Hampshire.

Leslie Kittenbrink, one of Greene’s sisters and his campaign manager, described his entry as almost last-minute. “He got his paperwork in like 48 hours before the registration closed, ” she said.

Kittenbrink explained her brother’s presidential campaign as part of the family’s long-term interest in politics. “We were brought up on at least paying attention to news and politics and what was going on. The 6 p.m. news was always on,” she said.

Greene grew up in the Belvidere neighborhood of Lowell, where politics were prominent, in both the town and his family. After graduating from what is now called UMass Lowell, he earned a doctorate in physics from the University of Wyoming. Greene worked in the programming and technology field before retiring. He now lives in Mountain View, Calif.

But Greene still has roots in the New England area, specifically New Hampshire.

One of his sisters, Priscilla Greene, lives in Nashua. His brother, Richard, owns a cabin in Pittsburg, N.H. Another sister, Connie Mead, is in Chelmsford, Mass. Kittenbrink, the youngest sister, lives in Pittsburg, Pa.

The campaign, as Greene says, is almost all family run.Campaign headquarters is in Priscilla’s house. Greene has been camping out on the floor. But the hardest part has been the lack of attention.

“As a second-tier candidate, getting attention is very difficult. The radios and TV stations are very slow to pick up on what you got, if at all,” he said.

Of his energy plan, Greene recalled his interest being piqued through his church, the Unitarian Universalist Church of Palo Alto. “Through a church group we started to investigate energy solutions and we got to the point where we decided thorium was by far the best alternative,” Greene said.

After the primaries, Greene plans on taking some time to get his life back in order, but that the energy plan will not be forgotten. He said,“I’ll probably start working on a book version.”

(Meghin Delaney, a junior with double majors in magazine journalism and political science, is covering the New Hampshire primary for The Lowell Sun.)