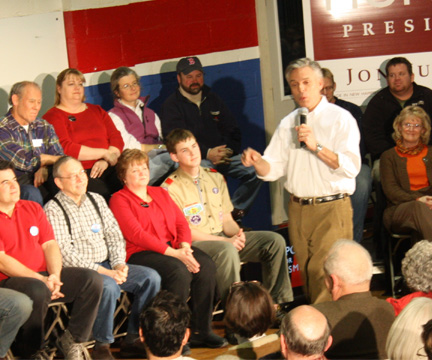 NEWPORT, N.H. (Jan. 6, 2012) — The Boston Globe has endorsed Jon Huntsman in the Republican presidential race. WATD’s Jared Kraham is following the Huntsman campaign and has the details: 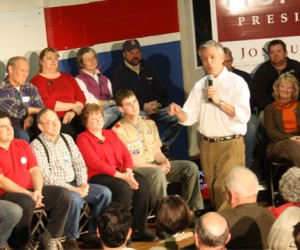 At a town hall meeting in Newport on Thursday night, former Utah governor Jon Huntsman announced the Boston Globe’s endorsement in front of cheering supporters. The Globe is Massachusetts’ dominant newspaper and covered Mitt Romney extensively when he was the state’s governor. In choosing Huntsman, the paper said he’s well-prepared to be president.

The Boston Globe cites Utah’s steady economic growth under a scandal-free Huntsman administration, as well as Huntsman’s service as ambassador to China.

Huntsman skipped the Iowa caucuses and has focused his campaign almost entirely on New Hampshire. The national campaign’s spokesman, Tim Miller, says Huntsman is going all out for the Granite State.

“We’re working the state harder than anybody else. Handshaking, doing it the old-fashioned way. That’s exactly what we’re trying to do here in New Hampshire.
(Tim Miller, Huntsman campaign spokesman)

Even with the Boston Globe’s endorsement, Huntsman has a lot of ground to make up, according to recent polls. Huntsman’s support hangs around nine percent, but campaign spokesman Miller predicts a final surge.

“We’ve seen some positive movement over the last few weeks — going from the back of the pack up to third and we hope that continues.”
(Tim Miller, Huntsman campaign spokesman)