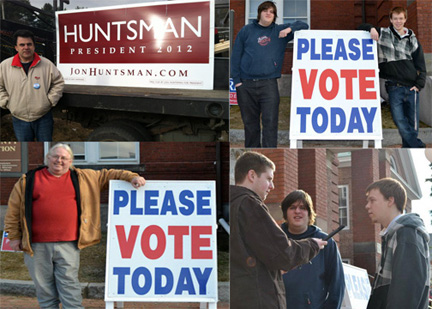 At the Newport town hall polling place, Rob Magnuson, 19, of Newport, had his first experience at the polls.

“I’ve never really bothered to get involved with politics or anything like that. It wasn’t my thing. I like Ron Paul. So far what I’ve seen of his, it really goes with my beliefs and I believe that it tops everyone else.”
(Rob Magnuson, first-time voter, of Newport, N.H.)

Rob’s friend Perry Langill, 19, was at the polls for one reason — to continue his support Texas Congressman Ron Paul. He even invited Rob, the first-time voter.

“Last night I actually ran down to Ron Paul headquarters, in Concord. I brought this guy Robert with me down there too. I think after enough time he got a little brainwashed into coming down here, so we got him to vote for Ron Paul too.”
(Perry Langill, 19, of Newport, N.H.)

Newport has about 6,000 residents and one polling place, the town hall.

Paul Johnson, 55, a painting contractor from Newport, says voting gives him the right to speak his mind when it comes to politics.

“I’ve always been fairy outspoken, as my friends can attest. I tend to say what I think and I figure that if I’m going to be the one that has an opinion that he’s not afraid to voice, I need to have some backing behind what I say. To be able to say, ‘Well at least I voted.’ I can’t be the loudmouth that doesn’t bother to vote.”
(Paul Johnson, 55, of Newport, N.H.)

“I am hoping that he’s the man that can really show the country that you need to pay attention to your bottom line – that you can’t spend, spend, spend and go nuts. We’re not electing Santa Claus here, we’re electing someone who can be living in reality and who can keep this country going in the right direction.“
(Paul Johnson, 55, of Newport, N.H.)

In nearby Claremont at the Claremont Middle School polling place, Don Gobin, 52, of Claremont, did his homework on the candidates and then cast his vote for former Utah Governor Jon Huntsman.

“Well, I’m a big supporter of Jon Huntsman. Like most New Hampshire residents we vetted all the candidates and I found him to be the best leader with the best track record and the best resume.”
(Don Gobin, 52, of Claremont)

Gobin is a real estate entrepreneur. He says that New Hampshire voters don’t miss an opportunity to become involved in big-time politics.

“Come out of their living rooms or from their couch and get excited about one candidate or another. New Hampshire is in the spotlight and we hope not fail the nation here.”
(Don Gobin, 52, of Claremont)