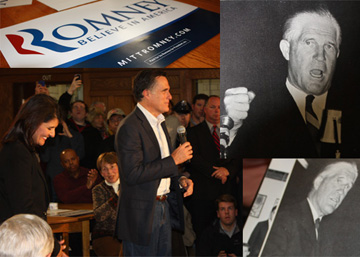 At the Tilton School, Governor Romney spoke to and touted his fiscal responsibility as governor and need for federal tax reform. A yearbook photographer snapped a few photos. The year was 1968. And the politician was Mitt Romney’s father, then-Michigan Governor George Romney. George Romney, like son Mitt, visited the school campaigning for theRepublican presidential nomination.

This time around, Mitt Romney occupied the same space — the school cafeteria — to make similar a similar pitch 44 years later. The nostalgic moment came when Jim Clements, the head of the school, show Mitt the old yearbook with the photo of his father.

“Gave him a few private moments to just look at it — probably bring back some memories to him about his dad and his run for presidency.” (Jim Clements, head of the Tilton School)

Here’s the history of the earlier Romney campaign: When George Romney ran in 1968, he initially led polls in the Republican primaries and in the general election against President Lyndon Johnson. But very quickly his campaign unraveled. Questions were raised about Romney’s eligibility to run for president. He was born to U.S. citizens in Mexico. And, more importantly, in an interview, he said was “brainwashed” into supporting the Vietnam War.

A that time, internal campaign polls suggested Romney would lose badly to Richard Nixon in New Hampshire. Two weeks before the state’s primary, Romney dropped out of the race.

Today, Mitt Romney is having more success. He leads in the latest New Hampshire primary poll with 42 percent support.

(Jared Kraham, a junior with dual majors in political science and broadcast journalism at Syracuse University, is covering the New Hampshire primary for WATD Radio.)