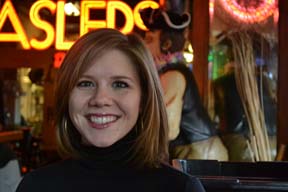 “He has reformed welfare.  He’s cut taxes.  I think he’s the only guy that can take on Obama and bring change to Washington,” said Curley.

Curley is one of the scores of Virginians in New Hampshire working for Gingrich and other presidential candidates. Some are staff members. Some are volunteers. All are drawn by the excitement of a national campaign and the possibility of helping to change their country.

They ring doorbells. They answer reporters’ questions. They paint signs. They live on caffeine and pizza — and little sleep. In many ways, they are the backbone and muscle of modern American politics.

At Ron Paul campaign headquarters in Concord, Kate Schackai is the media coordinator. She’s a native of Paris, Va., and moved to Wentworth, N.H., six years ago.

“I grew up a Democrat,” Schackai said. “But I converted in college and became a conservative before I encountered Dr. Paul.”  Schackai and many other Ron Paul supporters refer to him by his medical title. In addition to being a member of Congress from Texas, he is an obstetrician and gynecologist.

A typical day, Shackai said, means waking up at 7 a.m. and going to bed at midnight. As she describes her work, volunteers work the phones, rush in and out of the office and get ready to go door to door.

“I think the excitement you see from voters really energizes Dr. Paul,” Schackai said.  “It energizes us.”
At the campaign of Jon Huntsman in Manchester, Joshua Sacks, 23, of Arlington, Va., volunteers to help out. Normally, he works as an IT consultant in Washington, D.C. He  drove up from Arlington, Va., to work on Huntsman’s campaign.

On his second day in New Hampshire, Sacks went door to door getting the word out. “This is the first time I feel like it matters,” Sacks said.  “I think Huntsman is the only one with experience and intellect to take the country out of the hole that it’s in.”

For her part, Richmond-native Britt Curley, 26, came to Newt Gingrich’s campaign to work with his daughters, Kathy Gingrich Lubbers and Jackie Gingrich Cushman.  She coordinates their interviews and interactions with the press for Gingrich’s campaign.

“I do a hodge podge of things,” Curley said. “It’s anything they need, really.”  A typical day involves putting together press packages and working with the local media.

“My biggest challenge is staying organized,” Curley said.   But she relishes the challenge, she said. “It’s a hundred miles an hour,” said Curley, “and I thrive off that.”

After New Hampshire, Curley is headed to South Carolina and then Florida.

(Kathleen Lees, a graduate student in magazine, newspaper and online journalism at Syracuse University, is covering the New Hampshire primary and some of her stories appear in the Richmond Times-Dispatch.)