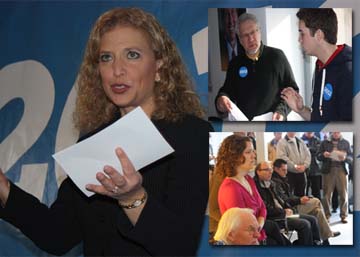 WATD’s Jared Kraham has the details.

With so many candidates, the Republican presidential field has had most of the attention in New Hampshire.

But in something of a stealth campaign, President Obama has the largest political operation. On the ground in New Hampshire, the president has twenty full-time staff members. And his campaign has raised almost $200,000 in New Hampshire.

Ray Buckley is the New Hampshire Democratic Party chairman. He says while Republicans are packing up and leaving the state, the Obama campaign is just getting started with his grassroots group called Organizing for America.

“Organizing for America, along with the party and the president’s operation, will have six offices up and open by Tuesday’s primary. And, with many more coming — over 20 staff on the ground — this will all be further increased as the spring goes along.” (Ray Buckley, chair of New Hampshire Democratic Party)

In a sign that the campaign is ramping up before Tuesday’s voting, the chair of the Democratic National Committee — Debbie Wasserman Schultz — came to town to deliver a pep talk.

And Obama volunteers started calling voters reminding them to look for the president’s name on the primary ballot.