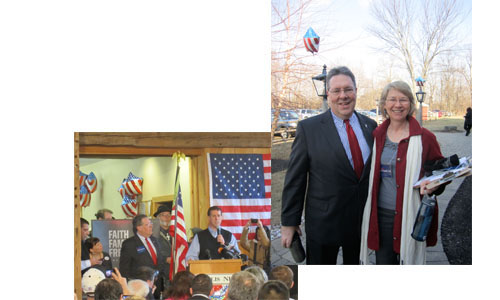 “New Hampshire is the filter for the nation,” said Luther, a state senator in New Hampshire and a emerging player in that state’s presidential primary. “This state is the home of retail politics.”

In this primary season, Luther has been stumping for former Pennsylvania Senator Rick Santorum, who has been rising in some political polls. Luther endorsed Santorum on Thursday and has twice introduced him at campaign events — including one on Saturday in Luther’s hometown of Hollis.

In his own political career, Luther was elected to the state senate’s District 12 seat in 2010. He sits on ways and means committee, dealing with taxes.

He was elected as part of a big swing in New Hampshire from a Democratic majority to a Republican super-majority. “There was a crazy deal going on here with fiscal and business policy,” Luther said. “That’s why I ran.”

Luther graduated from SU in 1981 with a bachelor’s degree in finance through the management school, which didn’t get its name of the Whitman School until 2003.

Luther met his wife, Melinda, at SU. She is 1982 graduate of the nursing program and now teaches nursing at Nashua Community College. The two have lived in New Hampshire since 1988.

Melinda endorsed Santorum a month ago before he won in Iowa. She likes him, she said,  “because he’s a consistent conservative.” She appreciates his experience, foreign policy plans, conservative social values, and focus on family, she said.

Unlike his wife, Luther waited until Jan. 5 to support Santorum. He was waiting, he said, to see if Santorum stayed in the race. Luther  describes himself as socially and fiscally conservative. He wanted a candidate whose values aligned with his, he said.

Even if Santorum does not get the GOP nomination, Luther said he would “absolutely” support whoever the Republican candidate is. “It comes down to that we can’t have a Democrat in the White House again,” he said.

Luther has worked in finance and business since he graduated from SU. He blames the current administration for the country’s economic recession, he said. “We’re in a very tenuous place in the nation, where 43 cents of every dollar that we spend as a nation is borrowed,” Luther said.

Luther remembers Syracuse as a great experience. “I have a fond memory at SU of having debates on the issues around business,” he said. “Something that I liked about that was it connected so much to the real world.”

His time in Syracuse prepared him for more real world experience too, he said. In October, he lead his community through a tough snow storm, he said. “I let people know where to get gas, where lines were down, who had generators,” Luther said. He’d learned to cope with those things from Syracuse’s snowy winters. But, he said, “I don’t miss the snow”

(Julie McMahon, a graduate student in the magazine, newspaper and online journalism program at Syracuse University, is covering the New Hampshire primary for The Post-Standard.)