Being a Neighbor is Good Politics for Romney 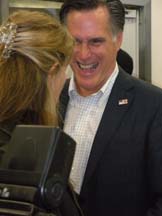 CONCORD, N.H. (Jan. 6, 2012) — For Republican presidential contender Mitt Romney, being a neighbor to New Hampshire is mostly a good thing.

Romney was governor of neighboring Massachusetts from 2003 to 2007. And that accounts at least partially for his resounding lead in New Hampshire’s upcoming primary, say voters, experts and Romney’s campaign.

Friday’s poll by Suffolk University and Boston’s WHDH 7 News has Romney leading with 40 percent of likely voters. Romney’s closest competitor, according to the poll,  is Texas Congressman and libertarian Ron Paul with 17 percent.

Romney’s lead is not a surprise to Al Chase, the chair of the GOP committee in Hollis, on the border with Massachusetts. For the past 28 years, Chase has crossed the border daily from his home in New Hampshire to his job as an engineer in Woburn, Mass.

Romney is well known to New Hampshire residents, he said. “There are people that feel that he’s kind of a local guy,” Chase said. “There’s always, human-nature wise, a tendency to look at somebody who is in your neighborhood or your area as maybe more closely aligning with you or your views.”

Ryan Williams, Romney’s campaign spokesman, said voters in New Hampshire have responded well to Romney because they were able to closely watch his work as governor. “Voters know him and have met him,” Williams said.

Specifically, New Hampshirites reacted well to seeing a Republican governor who was able to have a positive working relationship with a Democratic legislature, Williams said. And if voters need a reminder of Romney’s record, Williams said,  the campaign’s daily events highlights accomplishments like closing a $3-billion deficit without raising taxes.

Chris Galdieri, an assistant professor of politics at the New Hampshire Institute of Politics, said New Hampshire primary voters have a history of backing candidates from Massachusetts. The most populous parts of New Hampshire are in the Boston media market, he said. So New Hampshire residents read and hear much of the coverage of the neighboring state’s government and politics.

In 2008, Romney came second to John McCain in the New Hampshire primary. Romney’s Massachusetts connection did not provide enough of a boost to win then, Galdieri said, because McCain was very popular among New Hampshire Republicans and ran a strong campaign.

But since his loss in 2008, Romney has spent a lot of time in New Hampshire, particularly at his vacation home on Lake Winnipesaukee, Galdieri said. “He has essentially been running for president in 2012, since he didn’t get the nomination in 2008,” Galdieri said.

(Rebecca Kheel, a senior with dual majors in newspaper journalism and history, is covering the New Hampshire primary for The Berkshire Eagle.)