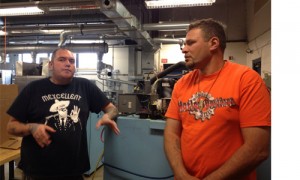 Joe Hernandez, left, talks with Kersten Hirsch, right, about the benefits of the HVAC/R program at BOCES in Central New York (Matt Porter)

For 17 years, Kersten Hirsch of North Syracuse worked at the Magna Powertrain plant in East Syracuse.  He worked his way from an assembly line worker to supervisor. Last January, the plant finally closed — he was left without a job.

Hirsch is among the millions in the U.S. thrown out of their long-time jobs and looking for training to get back into the job market. Those workers exemplify a vividly shifting economy with a growing mismatch between many workers’ skills and the market’s needs, say experts.  Millions of workers sit idle without a job because they can’t get or afford the training for a more applicable skill.

“Many employers are finding they can’t fill their job openings because the current unemployed don’t have the necessary skills,” said Syracuse University economics professor Don Dutkowsky. Job-training is not going to save the world, he said, but, it will make a difference.  “Sometimes we need to settle for small steps,” he said,  “And the small things that you do to help the economy in a positive direction, can help it gain steam as it goes along.”

The outlook is grim, say many workers and employment experts, with the federal government cutting back its funding for job-training programs while the demand increases.

Here is a snapshot of America’s jobs-training problem:

Many unemployed workers are returning to school for training.  At the local BOCES, a technical school in Central New York, dozens visit an open house each week.

About 600 students complete certificate programs each year, said BOCES coordinator Joanne Flood. Nearly 30 percent of them are people who were laid off and looking for retraining.“They have a skill that we’re going to transfer into a marketable skill,” said Flood.

A number of BOCES students get financial aid from the federal government. Included are training grants specifically designed for dislocated workers who are looking to develop a new skill.

The federal money is given out by CNY Works, one of over 1,700 self -described “one-stop career centers” run by the federal labor department.  The one-stop centers provide resume training, interview workshops, and personal career counseling for the unemployed.  They also divvy up financial aid of up to $5,000 each for workers laid off from their jobs and up to $15,000 for people laid off because their jobs moved overseas.

Lenore Sealy, director of CNY Works, said her department is overwhelmed by the demand for training. She is limited in the amount of grants she can give, Sealy said, so she asks applicants to do market research and prove to CNY Works that receiving the skills will land them a job.

“Everybody in the workforce, currently working or otherwise, needs to invest in career development,” said Sealy, “We try to help people see what career opportunities are available if they advance their skills.”

More than 2,300 workers retrained through funding from CNY Works re-entered employment.  Despite a nearly 80-percent success rate, the budget for job training shrunk by just under 15 percent over the last three years.

Joe Hernandez, 37, is one of the 24,000 who have sought help from CNY Works this past year.  He used to be a heavy equipment operator and the breadwinner in his family of four.  But after construction jobs dried up during the recession, his work slowly disappeared.

Now, he’s in a heating, ventilation, and air conditioning/refrigeration program at BOCES.  That field has more work, he said. The job means more stability for him and his family.

His most recent work has been out of town, Hernandez said, “I only got to see my wife and kids once a week.  It took a lot out of the family.” He added, “I figured heating and air-conditioning, it’s good year-round work.”

Job training is a costly business. More than $7 billion went to job training nationally from the Department of Labor in 2011. And just under $3 million of that was allocated in Central New York.

Some question whether federally funded training programs are worth the cost. Among the critics is Chris Edwards, director of tax policy studies for the libertarian Cato Institute in Washington, D.C. In a 2011 article, he wrote, “Federal employment and training programs don’t fill any critical need that private markets can’t fill.”

Edwards cites a 2011 report by the Government Accountability Office, Congress’ investigative arm, that showed the federal government spent about $18 billion on 47 separate programs — some which overlapped.  It’s a sign of wasteful government spending, Edwards said in his article.
But the GAO also says in its report that some of the repetition is necessary.

“When we look at services that target low-income neighborhoods,” Andrew Sherrill of the GAO said in a phone interview, “the Department of Health and Human services told us people may have trouble accessing the services if you try to constrain them to one program or one location.”

President Barack Obama proposes merging the job-training programs under the Workforce Investment Act and the Trade Adjustment Act.   The trade program has larger budget, $575 million, but is specifically targeted to workers who lost jobs because of outsourcing. Combining the two, the Obama Administration has said, can increase job training programs for all of America’s unemployed workers.

In the most recent budget proposal, the president also requested an additional $2.8 billion for job training over the next decade.

Democrats in Congress are proposing a $5 billion to build or improve community colleges’ job training facilities and technology. They want to set up a fund a Community-Based Job Training Grant that would help community colleges form relationships with workforce investment boards like CNY Works and employers to develop more focused programs that would help meet the demands of today’s workforce.  Sen. Kirsten Gillibrand, D-N.Y., supports this plan.

Congressional Democrats also want to develop career and technical education programs to prepare workers for jobs in high-wage, high-skill, and high-demand careers such as engineering, information technology and health care.  The measures would also promote on-the-job training programs that help subsidize workers at companies who take them on and train them.  Sen. Kirsten Gillibrand, D-N.Y., supports this plan.

Congressional Republicans say more “tax and spend” programing is not in the nation’s best interest.  They say changing the tax code can help corporations spend more time focusing on creating jobs and less time dealing with the tax code.

Like libertarian Edwards, they are also concerned about the overlap in some job programs.  They say Congress must be sure programs are fulfilling their intended purpose before allocating any more money.  U.S. Rep. Ann Marie Buerkle, R-Onondaga Hill, supports this plan.

For one-time Magna employee Kersten Hirsch of North Syracuse, he came to a career-changing decision after browsing the classrooms at BOCES.  He chose to take the certificate program in Electrical Maintenance.  The placement rate for the Electrical Maintenance Technician program — 100 percent.

Hirsch is betting on that success rate.  He’s the sole provider for two daughters — ages 4 months and 20 years — and his wife, he said.

He is still optimistic that he might see manufacturing return to the U.S.  But he knows he needs to be prepared otherwise.

“I’m betting that manufacturing will come back,” said Hirsch, “But until then I got to find another skill.  I’ve got a family to support.”

(Matt Porter is a graduate student in broadcast and digital journalism.)