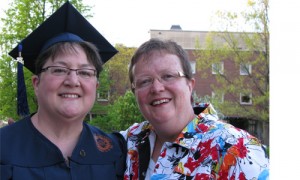 Brenda Wrigley and Cathy Pontante traveled from Syracuse in 2006 to say “I do” in Toronto.

“When we got married,” said Wrigley, 57, a public relations professor at Syracuse University, “our neighborhood didn’t blow up. Nobody died. Nothing changed.  We’re just another couple on the street.”

As of 2011, they are also now legally recognized as married by the state of New York.  They are among the 9 million—or 3.8 percent—of Americans who identify as gay, lesbian, bisexual or transgender, according a study by the law school of the University of California-Los Angeles. And they are among the advocates for changes in federal law to create a national policy on gay marriage.

On the opposition’s side, voters in at least two states soon can vote on proposals against gay marriage rights.  In North Carolina, a measure called Amendment One defines marriage as between a man and a woman in state constitution. It goes to a vote on May 8.  If the measure passes, the amendment would also ban any type of domestic union for gays and lesbians. In Minnesota, a similar amendment is on the ballot in November.

One of the key elements in the political and legal debates are the tax and other benefits associated with marriage. At the federal level alone, married couples are entitled to over 1,100 legal benefits.

But under federal law, gays and lesbians do not see any of those benefits even if they are married under state law or joined together in a domestic partnership or civil union relationship. The reason: The Defense of Marriage Act of 1996.  It was approved by Congress and signed into law by President Bill Clinton. It defines marriage as being between a man and a woman. So the federal government does not  recognize gay marriage.

In an emerging front in the battles over gay marriage, California advocates are pushing for same-sex equal rights to end up as federal law for all 50 states.  Their main hope, they say, is through rulings by the U.S. Supreme Court on — among other things — California’s ban on gay marriage called Proposition 8.

In California earlier this year, a federal appeals court upheld a lower-court ruling that Proposition 8—which banned gay marriage in 2008—is unconstitutional.  Supporters of the ban have appealed to the full 11-judge panel of the U.S. 9th Circuit Court of Appeals to a larger panel of judges.  If the 11-judge panel also upholds the unconstitutionality of the ban, supporters of the ban can still appeal to the U.S. Supreme Court.

The California case could reach the U.S. Supreme Court soon. But the “waiting game” is the better option, said Kevin Noble Maillard, law professor at Syracuse University and an expert in family law.  With the current composition of the Supreme Court, he said, “I don’t think this is the right time for this to come up.”

Another reason not to go forward to The Supreme Court just yet: not enough states have legalized same-sex marriage, Maillard said.  If more states are involved, it could put pressure on the high court, he said. “The court doesn’t want to see itself legislating from the bench,” said Maillard. He added, many politicians and judges have a “belief in the political system that it’s not the courts that decide policy, it’s the legislature.”

Chad Griffin is the cofounder and president of the American Foundation for Equal Rights, a Los Angeles-based organization, that is at the forefront of trying to create federal policy on gay marriage. The group specifically started to make the court case against Proposition 8.

“For every single American citizen to have complete equality,” said Griffin, “recognized by their state and federal government, it will take a federal action.”

Going through federal legislation is not a good idea at this point, said Griffin.  “With this Congress,” he said, “we do not have an equality-majority.” Unless Democrats take back the majority in the House, he added, no bill can be passed in favor of same-sex marriage.

But Griffin says he is optimistic about the courts. “The courts have been acting and acting on the side of equality and inclusion,” he said.  He added, “In a case like this, truth and facts and the constitution are on our side.”

But many opponents argue in favor of traditional couples as the best form of marriage and family.

“When we adopt a view of same-sex relationships we are intentionally denying the idea that a mom and a dad matter,” said the Rev. Jason J. McGuire, president of New Yorkers For Constitutional Freedoms.  He heads a statewide political organization devoted to family issues.

Having a mother and father is vital to a child’s upbringing, McGuire said. “History teaches us that children do best when raised by a mom and a dad,” McGuire said.

The federal Defense of Marriage Act should stand as is, said McGuire.  The federal government needs a definition of marriage, he argued.  And in states that legally allow it, same-sex couples should know they don’t have the same benefits as heterosexual couples before they make that decision, he said.

“Gay couples need to go into it with eyes wide open,  realizing that this is what the federal law states,” said McGuire.  “There are going to be some differences.”

Among the differences, according to the advocacy group,  the Human Rights Campaign, same-sex married couples cannot:

Brenda Wrigley, the SU professor who first married in Toronto, has a vivid example of the effects of the Defense of Marriage Act. She told a story about her partner, Cathy Pontante, who recently finished her bachelor’s degree at SU at the age of 57. Wrigley was allowed to use her employee tuition credits to pay for Pontante’s education.

Because they are not recognized as married by the federal government, the value of the tuition was added to Wrigley’s  salary as non-cash income.  Essentially, it appeared that Wrigley was getting paid more than she actually was. But she never saw that extra money.  She still had to pay taxes on that income.

“I paid thousands of dollars in taxes because I am gay,”  Wrigley said.

She, too, calls for federal action. “State by state victories are wonderful and they’re energizing to people,” said Wrigley, “but until federal law changes, it’s all a moot point.”