From Rochester to New Hampshire, a New Focus for Prof. 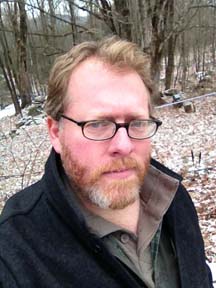 “They try harder here,” said Miller. For one, candidates are expected to do “old school” face-to-face campaigning, Miller said.

Miller is originally from Greece, N.Y. He moved to New Hampshire in 1995. In the Granite State, he quickly learned that primaries are a different ball game. Miller watched, for example,  as conservative columnist Pat Buchanan upset eventual GOP nominee Bob Dole in ’96.

At the time, he didn’t know much about the primary process here. Miller, unaffiliated with a political party, has voted in four election seasons. And now, he said, he is engaged in the New Hampshire political atmosphere.

In other states, voters generally see candidates in big arenas or on TV’s small screen. In New Hampshire, candidates have town hall meetings, visit local diners and sit down at  spaghetti dinners to answer questions.

“You get to see, can people really answer a question?” Miller said. “Most people in New Hampshire really appreciate that.”

In New York, Miller said, he never felt that the state’s primary would make much of a difference. “Voting was just something abstract,” he said.

New Hampshire has a reputation, he said, of being a Republican state. “It’s fiscally conservative, but I’d say socially progressive,” he said. “For social conservatives, stuff doesn’t fly here.”

He described New Hampshire as “a tough state” where residents are independent-minded. “People are self-sufficient,” he said, “It seems like everyone has multiple jobs and skills — and everything’s against us out here.” People don’t have a lot of patience, Miller said, for “the whining stuff coming out of Washington.”

Miller went to Purchase College and earned his master’s degree from Yale University. Now he teaches photography at Dartmouth College. He now lives in the small town of Acworth, N.H., where voting is a community affair.

“Primaries here are just like elections,” Miller said. “You go in, mark the candidate you want, and there’s somebody — for me, it’s my neighbor — who makes sure you actually get the ballot in the box.”

He has generally voted in the Democratic primaries, he said. But on Primary Day, he plans to register as a Republican, as New Hampshire law allows, and vote in the Republican primary on Jan. 10. He is leaning toward Jon Huntsman.

Miller has received many pamphlets and phone calls from the Huntsman campaign and he wants the candidate to be taken more seriously.

Many of his usually unaffiliated peers, Miller guessed, would be “voting strategically” — voting for whom they think can beat President Barack Obama or whom they hope won’t beat Obama.

That’s not Miller’s motive. “I would probably support Obama in a general election, but I want him to actually earn it.” Huntsman would be the candidate, Miller said, to give Obama the best run for his money.

If he had to guess, Miller said, he predicts Romney will win the New Hampshire primary.

“I’m not seeing the same kind of excitement as year’s past,” Miller said. “I don’t think it’ll be a big turnout. Depends on the weather.”

(Julie McMahon, a graduate student in the magazine, newspaper and online journalism program at Syracuse University, is covering the New Hampshire primary for the Rochester Democrat and Chronicle.)