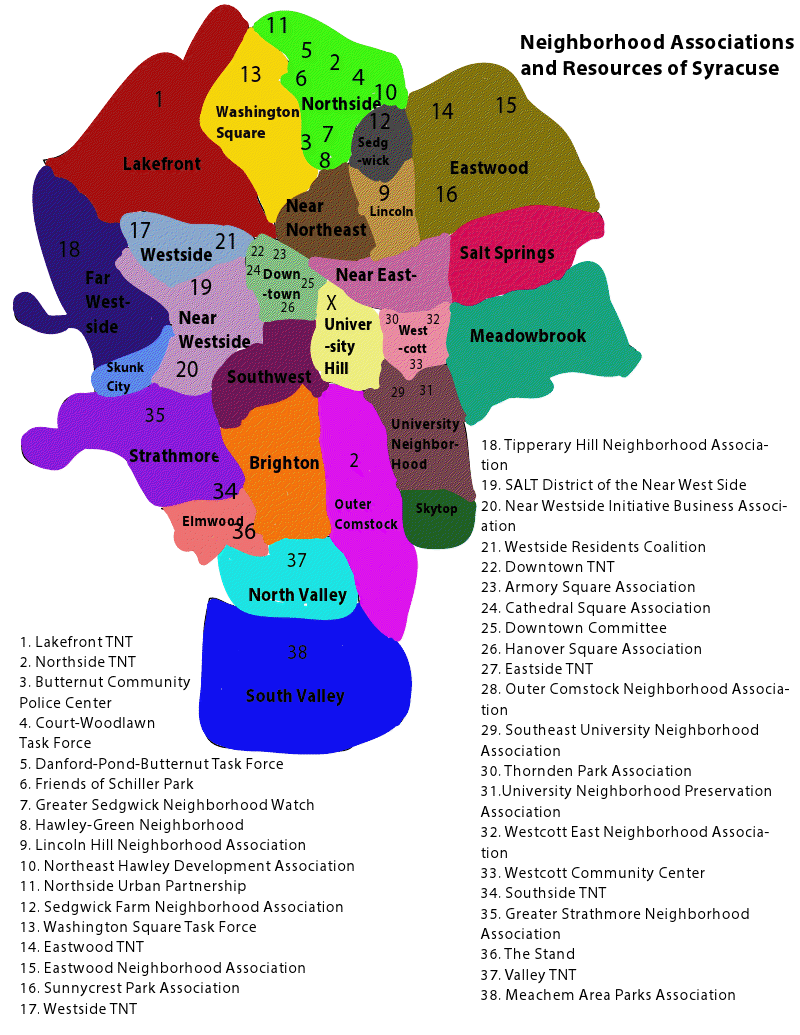 When Harry Lewis joined the Southeast University Neighborhood Association in 1988, he felt a connection with the association’s desire to uphold the quality of life in the university area.

“The unity in number of people to create or help to make change” was his reason, recalled Lewis, a resident of Lancaster Avenue on the East Side. He has been a member for 25 years.

His motivation to join the association came from his opposition to Wegman’s moving into the neighborhood and Syracuse University’s plans to build a new dome at Archbold Stadium. The dome was still built, but Wegman’s did not move in.

“Syracuse made it into athletic fields and improved the property. We were happy,” Lewis said.

The Southeast University Neighborhood Association is one of at least 42 neighborhood associations and groups in the city of Syracuse’s eight neighborhoods, according to the city’s official website.

To support themselves, some get government money. Some collect member dues. Others hold bake sales, T-shirt sales, candy or even annual dinners.

Typically, such neighborhood groups coalesce around a sense of community pride or through concerns residents felt weren’t being dealt with by government, say neighborhood development experts.

“It’s sort of like, ‘Yes, they’re doing a good job, but we can do it better,” said Carol Dwyer, director of the Community Benchmarks Program at the Maxwell School of Syracuse University. The program is a three-credit course that supports local governments and nonprofits.

Sheena Solomon is the director of neighborhood initiatives at the Gifford Foundation, a private foundation that makes grants to help strengthen neighborhoods. She cites community concerns as the spark for many neighborhood groups.

“There’s a group of individuals who are like, ‘You know what, I don’t like the fact that they’re trying to put this Walgreen’s on the corner in my neighborhood,’” Solomon said.

But sometimes these groups do not reflect the diversity of the neighborhoods, Solomon said. “Almost all of them, if you did a racial makeup of these associations, they will all be predominantly white, middle-class individuals,” she said.

In local politics, the groups also often wield a lot of influence, especially during citywide elections in which candidates want to get a sense of the key issues pertaining to neighborhoods and gain support for their campaigns.

“You’ve got candidates that are there to listen and hear about what the important issues are,,” said Andrew Maxwell, the city’s director of planning and sustainability.

The roots of many of the groups go back to the 1970s with a national neighborhood-empowerment movement, said Luke Dougherty, the city’s director of community engagement. That movement coincided with the birth of federal programs such as the community development block grant to deal with housing issues.

Here’s a look at some of the oldest Syracuse neighborhood groups:

The groups work on quality of life issues, including crime, code enforcement, housing, and new commercial developments, said Bob Oberst, vice chair of the board of directors of Neighborhood Watch Groups.  “We’ve always been interested in anything that made the neighborhood better or maintained the quality of the neighborhood,” Oberst said.

The organization has one city employee, Tony Borelli, who is the group’s program coordinator. Members of the watch group are volunteers who use their own money to fund their projects.

Ten years ago, Oberst’s watch group for the Far West Tipperary Hill neighborhood planted gardens in the neighborhood through grants from the Central New York Community Foundation ten years ago and eight years ago the group built a new concession stand for the West End PDA Little League.

The organization’s goals include affordable homes, equal access to public services, lower crime rates and access to fair credit and bank lending. Recently, it has focused on crime prevention and improving the housing stock.

“We work to organize residents and empower them to change what they want to change in their neighborhoods to improve their lives,” said Phil Prehn, a community organizer for the group.

The group is funded by members’ dues—$20 per household for one year and $30 per household two years. It also raises money by selling candy and t-shirts and hosting the group’s annual dinner. They also receive a $65,000 grant from the Division of Housing and Community Renewal’s Neighborhood Preservation Program. The group has almost 300 members.

On April 25, Syracuse United Neighbors worked with Near Westside residents and the local firefighter union to host a rally in protest of the closing of Fire Station No. 6 on West Street, whose construction was made possible by the organization.

“The current city budget is calling for budget cuts coming out of the fire department,” said Prehn, “and it’s going to affect services in a couple of our neighborhoods.”

(Madina Toure is a graduate student in magazine, newspaper and online journalism.)

This entry was posted in Spring 2013. Bookmark the permalink.