Huntsman gets “ticket to ride” to South Carolina 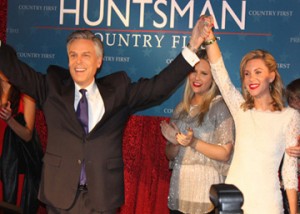 MANCHESTER, N.H. (Jan. 10. 2012) — A third-place finish in New Hampshire for Republican presidential hopeful Jon Huntsman has not derailed his candidacy. WATD’s Jared Kraham has the details.

A lively crowd of Huntsman supporters crammed a downtown Manchester bar on election night. They cheered when he announced his next step.

Huntsman will move on to compete in the South Carolina primary on Jan. 21. There he sits near the bottom of the pack in recent polls.

In New Hampshire, Huntsman came in third to front-runner Mitt Romney and Ron Paul on Tuesday. Huntsman had skipped Iowa. He had focused nearly all his campaign resources on New Hampshire, where he has had 170 public events.

As the votes came in Tuesday night, Huntsman’s wife and three daughters joined him on stage. He called on Americans to face new challenges.

“Our nation’s future is how prepared we are to rise up as the American people and hit head on the competitive challenges of the 21st century. You know what I’m talking about?”
(Former Utah Gov. Jon Huntsman)

Huntsman’s campaign saw a late surge in polls days before the first-in-the-nation primary. He described his third-place finish this way:

“Here we sit tonight ladies and gentleman with a ticket to ride and to move on. Here we go to South Carolina. Thank you all so very much!”
(Former Utah Gov. Jon Huntsman)