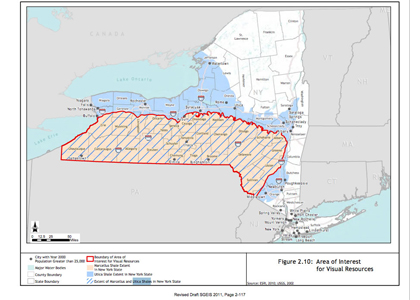 Thousands of feet below the Marcellus Shale, another rock formation — the Utica Shale — waits for its turn in New York’s natural gas-drilling spotlight.

“We believe New York has tremendous potential that has yet to be realized,” said Dennis Holbrook, spokesman for Norse Energy corporation. In recent years, Norse Energy has been one of the major gas drillers and major player in the ongoing controversy about drilling.

Gas companies, like Norse Energy from Buffalo, want to expand drilling into the deeper Utica Shale. The Utica Shale formation extends west to Ohio and as far south as Tennessee and Virginia. In New York, it extends from Watertown to the Pennsylvania border and includes all of Onondaga County.

Much of the controversy — in New York and elsewhere — centers around  high-volume hydraulic fracturing.

Hydraulic fracturing — known as “hydrofracking” — uses a pressurized mixture of water and chemicals to blast through rock underground. In 2010, the New York State Assembly put a moratorium on the controversial practice, until more environmental studies could be completed.

Opponents claim the hydrofracking fluids contain harsh chemicals that will pollute the environment near drilling areas. Supporters say environmental affects would be minimal and that gas drilling would bring substantial economic activity to the region.

In New York, much of the Utica-Shale drilling has been in Madison and Chenango counties, said Steve Palmatier, a natural-gas consultant for Chenango County government and a member of the American Association of Petroleum Geologists.

Gas companies prefer drilling into the shallower Marcellus formation, he said, because it is cheaper and a known producer. Exploration in the Utica Shale has not been as extensive. But Palmatier suggests the Utica Shale’s output is promising. Often the gas from the Utica Shale gas seeps into shallower, softer rock layers and is easier to reach, he said.

Utica and Marcellus shale drilling have similar health and safety concerns, Palmatier said. Environmental effects are an important consideration in drilling, he said. And most local and state officials are still asking questions about how safely the gas can be removed.

One of the reasons the questions linger, Palmatier suggested, is because the Department of Environmental Conservation “has not been clear in explaining the environmental studies and has missed several deadlines publishing its findings.”

For now, while the state looks at whether to extend its hydrofracking moratorium, some local governments — including the city of Syracuse and Onondaga County — have passed bans on hydrofracking.

(Jared Kraham is a junior with dual majors in political science and broadcast journalism.)